The early 2000s were literally the “best of times, the worst of times” for video gaming. Sega peaced out of the industry, but PlayStation 2 was so dominant and amazing that no one really cared. Amidst this chaos, Microsoft entered the fray and became one of the pillars of modern console gaming with its Xbox brand. Now on its third console, it is hard to believe that the Xbox’s story started with its retail launch in 2001 and continues to this day.

That’s because most people wrote the original Xbox off without ever giving it a first glance.

One thing that the original Xbox machine had going for it was that it was really, really powerful – perhaps the most powerful console of that generation by any measure. This gave gamers titles like Morrowind and Halo on the machine, so the Xbox brought the heat as best it could with regard to competing with Sony and the Nintendo GameCube.

And that’s really the tale of the tape with the original Xbox: Hit after hit, awesome game after awesome game in order to establish a brand – and it worked.

In this article we’re going to tell you about some of the lesser known Xbox games that are, nonetheless, amazing titles worth a look. If you’re an Xbox fan or just love retro stuff, you’ll find some titles here to add to your collection for sure.

Starting life on the ill-fated Dreamcast, Phantasy Star Online: Episodes I & II is an amazing game for people who love the Phantasy Star series and early online role-playing games. Coming out before World of Warcraft (and even predating Runescape), Phantasy Star Online was a breath of fresh air when it came out for the Dreamcast. Developed to show off that system’s forward-thinking online functionalities, Phantasy Star Online is still one of the most beloved Sega titles to this day. A little antiquated by today’s standards in terms of gameplay and mechanics, the graphics, sound, and music nonetheless hold up surprisingly well. The Xbox also came loaded out with robust online features and adding Phantasy Star Online: Episodes I & II was a no-brainer for Sega. And gamers were the ones that lucked out in the end: Even though Sega bowed out of the console wars, the Xbox was the beneficiary of this strategic retreat.

A single-player, action-adventure game from Namco, Breakdown integrates heavy storytelling into a gameplay style that can best be described as a fighting game. Recently announced for backwards compatibility with the Xbox One, Breakdown was a critical darling that just never seemed to take off with general gaming audiences. This could be because of its many quirks and a general lack of polish in some areas. That said, what Breakdown does, it does well and it does it in a unique way. Putting a premium on bizarre storytelling and bare knuckle brawling is never a bad thing, after all. 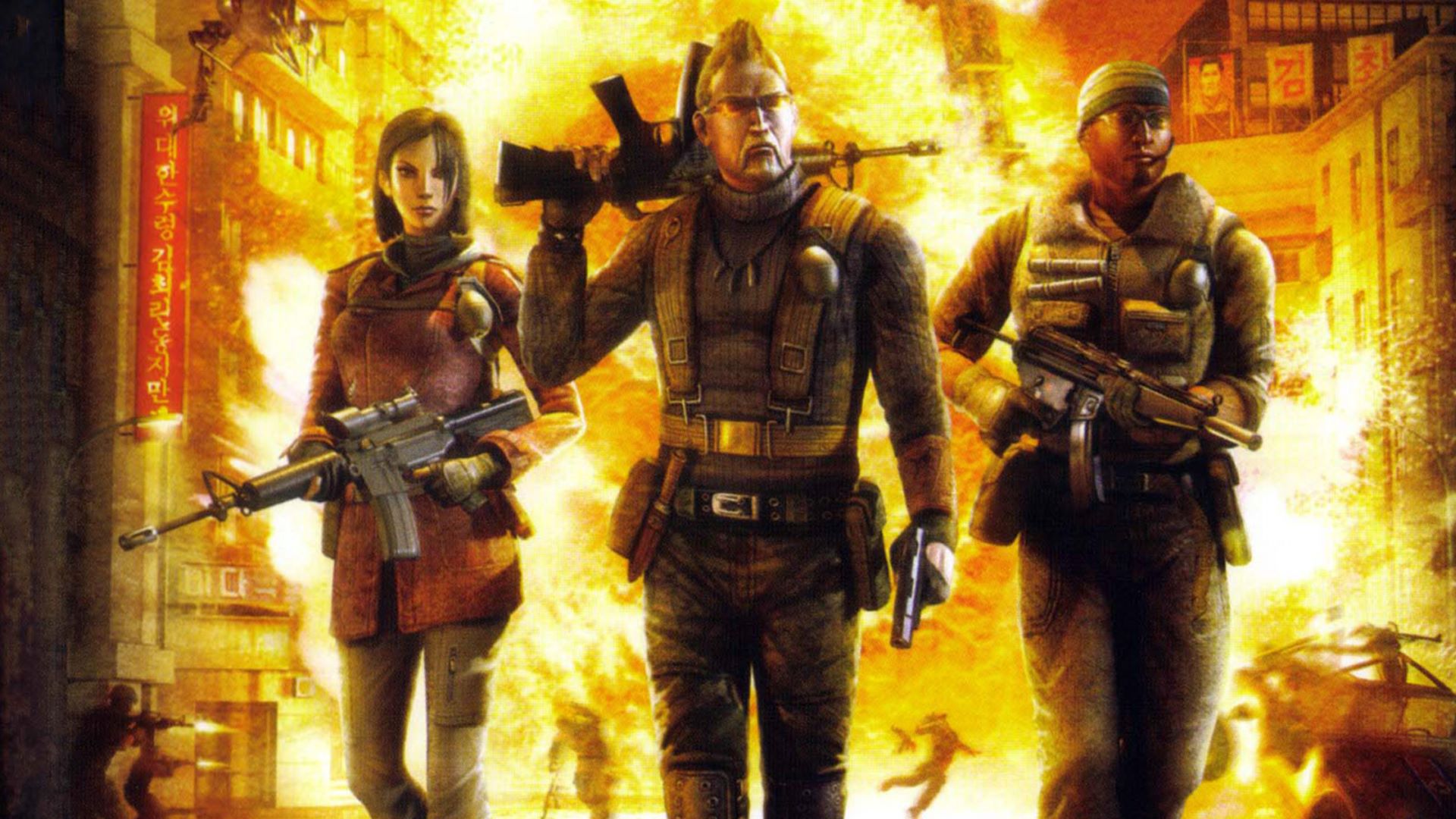 Pandemic Studios action-adventure title that came out on multiple platforms, Mercenaries: Playground of Destruction is one of the many awesome action games to be found in the Xbox’s library. Done in what could be called a sandbox style, the game largely lets players choose their own destiny when it comes to what missions to do and what to focus on in terms of specialities. Involving North Korea, South Korea, Russia, and China, this game’s storyline is bonkers as all get out but that’s a positive in this genre. What really stands out is how destructible the environments are – something many players still beg for to this day. Player actions and pure wanton destruction come at both the price of factional reputation as well as money. If these mechanics sound a bit ahead of their time, that’s because they are. Mercenaries is one of the most thoroughly modern games on this list and one that fans of Battlefield and Call of Duty should check out.

7. Beyond Good and Evil

You’ve probably heard of this game if you consider yourself a true connoisseur of video games. A cinematic masterpiece that combines action elements with puzzle solving mechanics, Beyond Good and Evil is a study in how to put a great game together. A lot of the strength of the game relies upon its high-quality story but everything else works just perfectly as well. It’s hard to say something about Beyond Good and Evil that hasn’t been said before, but if you love classic PC action titles that emphasized unfolding mysteries and intermittent puzzle solving, then Beyond Good and Evil will probably be something you want to experience.

A game combining dog fights in space with boots-on-the-ground first-person shooter action is bound to be unique, and Mace Griffin: Bounty Hunter is just that. Developed by Warthog Games, what makes Mace Griffin awesome and different from other titles out there is that there is a seamless transition between the two modes of gameplay. This is perfect, too, because the action never lets up even for a minute.

Coming from the legendary creatives at BioWare, Jade Empire is an action role-playing game that uses martial arts, East Asian mythology and aesthetics, and a well-honed combat system in what can only be called one of the most unique epics of its generation. A game that is an example of something that could only be done of the Xbox, Jade Empire’s lush graphics, beautiful score, and vast world hold up well by every modern standard.

A sequel to Oddworld: Abe’s Oddysee, this puzzle, platforming game emphasizes atmosphere and story while presenting the player with ever increasingly difficult puzzles to solve. The post-apocalyptic vision present by Oddworld, combined with its novel approach to storytelling and puzzle solving, make Stranger’s Wrath a total gem on the original Xbox.

One of the grittiest, darkest comic book properties out there, The Punisher doesn’t quite receive the same levels of love as his other Marvel brethren do. But when it comes to making one of the best games for the original Xbox, The Punisher is one of those marquee titles. Developed by Volition and published by the now-defunct THQ, The Punisher loosely ties into the movie property of the same name released around the same time. The game features a bevy of cameos from Marvel luminaries including Iron Man, Nick Fury, Black Widow, Matt Murdock (the alter ego of Daredevil), Bushwacker, Kingpin and Bullseye.” The game’s mechanics largely revolve around stealth, gunplay, and exploration. Immensely powerful and armed with “punishing” attacks, The Punisher never seems out of whack when it comes to game balance. Equal parts narrative and explosive exposition combine for a Marvel property that oddly didn’t receive enough love in its day. If it had been released now, at the height of the Marvel Cinematic Universe, we think things would have gone much differently for the property.

Described as one of the most unique titles on the Xbox when it came out in 2004, Phantom Dust represents Microsoft’s earnest effort at bringing in high-quality Japanese developers into the Xbox fold. Combining a first-person shooter with elements of a card game, Phantom Dust is at times highly atmospheric and weird and at others completely pedestrian and commonplace. The jump between the bizarre and the practical underpins a lot of the game’s style and the action, while awkward at times, is uniquely satisfying and satisfyingly unique. Phantom Dust feels like what you would get if you told a developer to give you something like Metal Gear Solid but with elements of Halo, Silent Hill, and some other crazy stuff thrown into the mix for good measure. Basically, Phantom Dust is a really good anime transformed into a very good video game.

A game with one of the largest cult followings to this day, many people will argue to you that Psychonauts is both the best game and most underrated game on the original Xbox. A platformer dripping with charm, Psychonauts is an exploration of what a Mario game would be like if it included tons of narrative, nearly limitless gameplay variants, and a bright, cartoony sci-fi world. Like many of the other games on this list, Psychonauts has held up well with time and is one of the better games on this list. If you’re looking for a throwback that doesn’t even begin to feel like one, Psychonauts is your ticket.