When it comes to classic consoles, few command quite the esteem that the Nintendo 64 does. The home of titles such as Super Mario 64 and Golden Eye, among others, the Nintendo 64 was Nintendo’s response to the growing popularity of 3D graphics and multiplayer gameplay. Like the Super Nintendo before it, the Nintendo 64 boasted of a top-shelf library of triple-A first-party titles from the Big N and a bevy of other companies. You’ve probably heard of the biggest titles on the system, but what about the more obscure – though equally stellar – titles the Nintendo 64 holds in its library?

In this article we’re going to discuss the 10 top underrated Nintendo 64 games. You’ve probably played or know someone that has owned most of these if you haven’t owned them yourself so it isn’t like the titles are a complete mystery. That said, we know you’ll find more than a few surprises here.

Published by Take Two Interactive and developed by DMA Design, Space Station Silicon Valley is a platformer that arrived for the Nintendo 64 in 1998 and features a robot named Evo that is a microchip capable of controlling animals to move around and the explore the environment. A trippy game, it also features light puzzle-solving elements as well as a narrative but, really, the focus is on how well the game comes together as a total package. Coming out relatively later in the Nintendo 64’s life, Space Station Silicon Valley wasn’t overlooked so much as it was overcrowded.

Luxoflux’s vehicular combat game for the Nintendo 64, Vigilante 8, is part of the Interstate 76 series and features vehicular combat in arenas across the western United States. In the tradition of Twisted Metal and Super Mario Kart, cars can add up to three weapons in addition to the standard machine gun. Levels even feature special trigger events that launch weapons or do something else to your opponents should you be lucky enough to set them off first. There is also a unique system of special moves for each car that uses up a large amount of ammunition in exchange for a critical hit on an opponent. If an opponent is nearly finished, this maneuver triggers something called “totaling” which is, in essence, a finishing move. In addition to the multiplayer mode – a necessity in the vehicular combat genre – there is also a gripping story mode for players to complete. 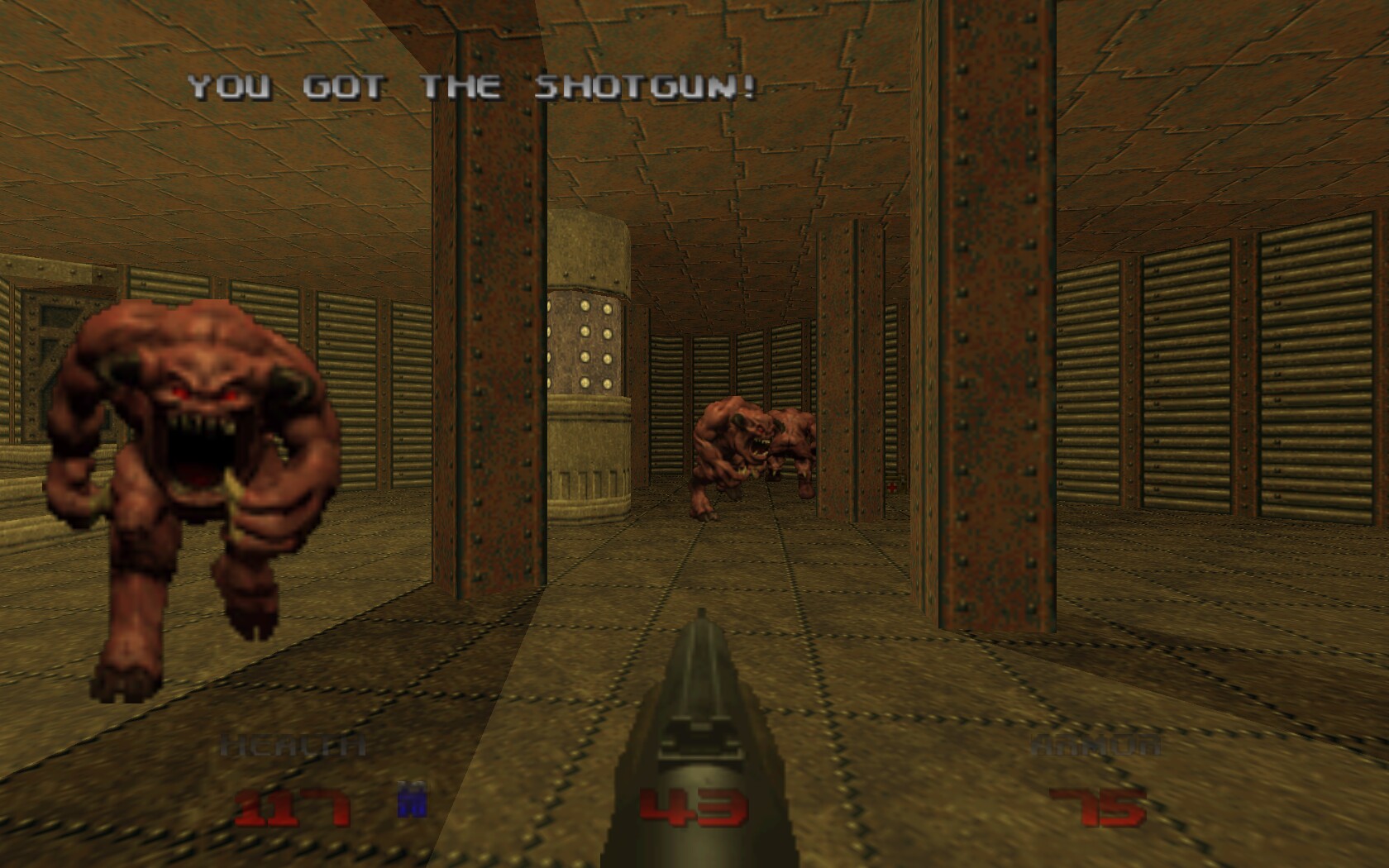 Most of us have played DOOM, whether on the PC or some other port. Few of us have played DOOM 64, and that’s a shame, because it is easily one of the best versions of DOOM ever made. Sporting all new graphics, from enemy sprites to stage art, DOOM 64 takes advantage of the Nintendo 64’s unique capabilities and gives players an experience inspired by the horror classic but definitely doing its own thing all the while. What stands out most about DOOM 64 is how atmospheric the game is. A haunting soundtrack plays as you make your way through dark corridors, strange sounds echoing off the walls. Some of the enemy redesigns leave a little to be desired, but all of them strip away the PC original’s sci-fi classic motif and replaces it with a much more hardcore horror look. Fans of DOOM owe it to themselves to play this game.

Harvest Moon was Stardew Valley before there was such a thing as Stardew Valley. As the grandfather of role playing game farming simulators, the Harvest Moon series established a lot of the conventions of the genre that we are familiar with today. One game in that series that is often overlooked is the Nintendo 64 outing. Whether due to its somewhat PlaySkool character aesthetics or because the Super Nintendo iteration was just that good, the Nintendo 64 iteration doesn’t get as much love as it should. And that’s a shame, because Harvest Moon 64 is one of the best games on the N64 in this genre. You own a farm that you inherited, but it is in somewhat bad shape. After repairing it and cleaning things up you then set out on a path to become a local farming tycoon while also building your dream home and starting a family. The town life is really vibrant, with festivals and different characters to interact with scattered throughout. If you’re looking for a good farming simulator or a solid RPG on the Nintendo 64, Harvest Moon 64 is top notch stuff.

More by us:  Star Fox 2, Super Punch-Out!! and More To Be Added To Switch NES and SNES

Back when Rare and Nintendo still talked to each other, Blast Corps was one of the many games born out of that close partnership. A game that is cast as a destruction derby slash action game, you basically have to destroy things in the path of a runaway vehicle armed with a nuclear missile and that’s it. While it might not sound like much, it’s crazy fun and the action gets more than a little intense, especially as you make your way through one of the game’s 57 levels. The game was Rare’s first foray on the Nintendo 64 and received tons of good press but, sadly, faltered when it came to total sales. While the graphics haven’t held up that well, the gameplay has and it makes Blast Corps a worthy jaunt if you’ve got it around.

This arcade racer set in the future is just that – a race game with a futuristic vibe and loud music with accompanying sound. San Francisco Rush 2049 is everything that was glorious about 1990s racing games from the arcade. Think Ridge Racer on the PlayStation, except for brighter and with better graphics. One genre that the Nintendo 64 did well was racing, and it shows with San Francisco Rush 2049. There’s tons of stuff to do here and you’ll probably waste hours mastering its mechanics. That said, when it was released it, too, landed in a crowded field of competitors and simply failed to stand out that much. This doesn’t change that it is a good game and makes it more than worth your time if you get a chance to check it out.

Another title from DMA Design, Body Harvest is an action adventure game where you assume the role of Adam Drake, a kind of supersoldier, and you take on the invading alien hordes. Apparently these aliens harvest bodies from Earth every 25 years and Adam Drake needs to find out why. To do this he uses a time travel device that gives him access to various periods in history at different spots around the globe, from the WWI-era up until the modern day. To solve this mystery players can go in a path they choose, so the game isn’t linear though it does have a concrete beginning and ending. When traveling to these different locales you will also need to protect them from the invading aliens. Part classic sci-fi novel and arcade action game, Body Harvest is another quirky title in the Nintendo 64’s lineup that makes you long for the good old days when devs went a little crazy.

More by us:  5 Things You Didn't Know About: Nintendo

Volkswagen’s iconic car gets its own racing game on the Nintendo 64, and it is one of the best on the system. Basically you travel around the world racing in your VW Beetle. There are both single player and multiplayer mode with single races and championship circuits for each. Every vehicle in the game is a VW New Beetle so, if you’re not feeling that car, tough luck. This game offers more beyond a lineup of tons of cool supercars and instead focuses on mechanics and good, old fashioned fun. Best played with friends, Beetle Adventure Racing will probably surprise you with just how good it is.

If you played the SNES game, then this series probably doesn’t need much introduction but if you haven’t then just imagine an action adventure game with a medieval Japan theme and you have the Goemon series. Infused with Japanese culture and presented in a disarming anime style, Mystical Ninja is about adventure and survival with gradually ramping up levels of difficulty that make it a constant challenge throughout. If you’re a fan of older Japanese games then Mystical Ninja is probably your cup of green tea.

There are a lot of modern versions of this game floating about so we wouldn’t be surprised if you’ve heard of it. Featuring the iconically foul-mouthed Conker the squirrel, this game from Rare takes that dev’s best talents and pushes them into the N64 era. You have all the platformer greatness of a Donkey Kong Country with the crass humor that is part and parcel with many titles from the 1990s of its ilk. Oddly compelling and solidly made, Conker’s Bad Fur Day continues to shock and awe, making it a classic for the ages.