One of the most popular systems ever released, handheld or otherwise, the original Game Boy from Gunpei Yokoi changed the way gamers viewed on-the-go gaming forever. In many ways you can see the impact the Game Boy had all around us from smartphone games to the latest Nintendo hybrid console that combines the best of both worlds.

A commercial success when it debuted in Japan in 1989, the Game Boy boasts one of the largest libraries in all of video gaming – and that can be both a blessing and a curse for gamers. After all, how do you decide what to play and what to leave well enough alone.

You might be familiar with a few of the classics on the system such as Tetris and the Mario Land series, but what about the more obscure titles that inhabit its catalogue? There are a lot of them – from educational titles to medical games as well.

Indeed, with one of the most varied libraries for any system, the Game Boy cannot help but have something for everyone. And with recent rumors that the console might be making some kind of comeback in the age of everything retro what better way to get acquainted with it than by learning about some of its obscure titles.

In this list we’re going to separate the best from the rest when it comes to the 10 top underrated titles for the original pea-green screen Game Boy machine. If you’ve heard of some of these games you’re in deep to the Game Boy ecosystem but we suspect most of you will have never seen these titles before today.

The third Castlevania title to make its way to the Game Boy, Legends continues the stellar gameplay of the first two entries and offers a few unique twists on the expected format with the swap out of subweapons for magic spells and using hearts as currency to purchase other weapons. As the character of Sonia Belmont, you encounter series stalwarts such as Dracula and Alucard in a game that is billed as the first encounter between the clan and Dracula but which is not something that is now recognized in canon. The Game Boy Castlevania titles do a great job of balancing difficulty with compelling gameplay and this is no different in Castlevania Legends though one could easily make the argument the Konami had mastered the formula by this stage.

More by us:  5 Things You Didn't Know About Mario Brothers

Coming out late in the Game Boy’s long life, 1998 to be exact, James Bond 007 is a single-player action adventure title developed by Saffire Corporation and acts as an overview of the Bond series of films up to that point with a motley cast of iconic characters drawn from that universe. Presented from a top-down perspective, Bond has a variety of weapons and tricks up his sleeve when it comes to taking out enemies in 11 different levels that are broken up by interludes of gambling minigames in a nod to the title character’s penchant for rolling the dice. A charming title through and through it is reminiscent of the classic Metal Gear games for the NES in form and execution but retains all of the charm of the 007 films.

Developed by Nintendo legend Shigeru Miyamoto, Mole Mania is one of the most charming games by the wunderkind that you’ve probably never played before. Billed as a puzzle game but infused with elements from Nintendo’s other classic titles, this single-player experience involves rescuing your mole family by traveling underground while avoiding pitfalls and enemies along the way. A lot of the game’s strategy comes from how skillfully you can avoid these environmental dangers with special attention given to enemy variety. Some reviewers have compared it to classic NES titles like the Lolo series which is a title renown for its seemingly innocent demeanor yet tough as nails difficulty level.

More by us:  Ed, Edd n Eddy: The Mis-Edventures - Metacritic, you got it wrong!

A game from the Ghosts ‘n Goblins series of games that pedigree need not scare you away from it as Gargoyle’s Quest shares little of that title’s breathtaking difficulty and instead puts forth an effort infused with charm and sophistication. An action platforming game in which you use the various abilities of the titular Gargoyle to make it through to your objective, Gargoyle’s Quest also has progressive abilities that you can improve in a nod to more modern games that infuse RPG elements into almost everything they do. One of the best changes Gargoyle’s Quest introduces is a powerful avatar character which is a marked change from the portagonist of the Ghosts ‘n Goblins games.

Xanth Software’s first-person shooter Faceball 2000 is a unique game in the Game Boy’s library as it is, ostensibly, a happy faced-DOOM clone and the gameplay, though not gory and horror-laden like those games, is nonetheless similar fare. This is an impressive game for the Game Boy in that one wouldn’t expect this kind of title to appear on the system. The graphics are crisp and clear – almost basic to the point of being minimalist themselves. This gives it a timeless quality that helps it age well. That said, the gameplay is slow and strange but that’s part of the charm of the game. If you want to take a look at something esoteric and strange, Faceball 2000 should fit the bill.

This game is a classic that made its debut back on the Atari systems and basically involves guiding a very delicate ghost through environmental hazards that will result in his immediate death. Built like a fragile balloon, if this ghost hits any obstacles as he is flying through the haunted house he will die and that’s basically the crux of the game. A lot of the challenge relies upon not only how the levels are laid out but also at how well the player can control their character. Featuring tight controls and charming graphics, Bubble Ghost is a charmer of a game that is sure to keep players thrilled for hours on end as they try to master its mechanics.

More by us:  The Top 5 Best Super Mario Power-ups

2. Batman: Return of the Joker 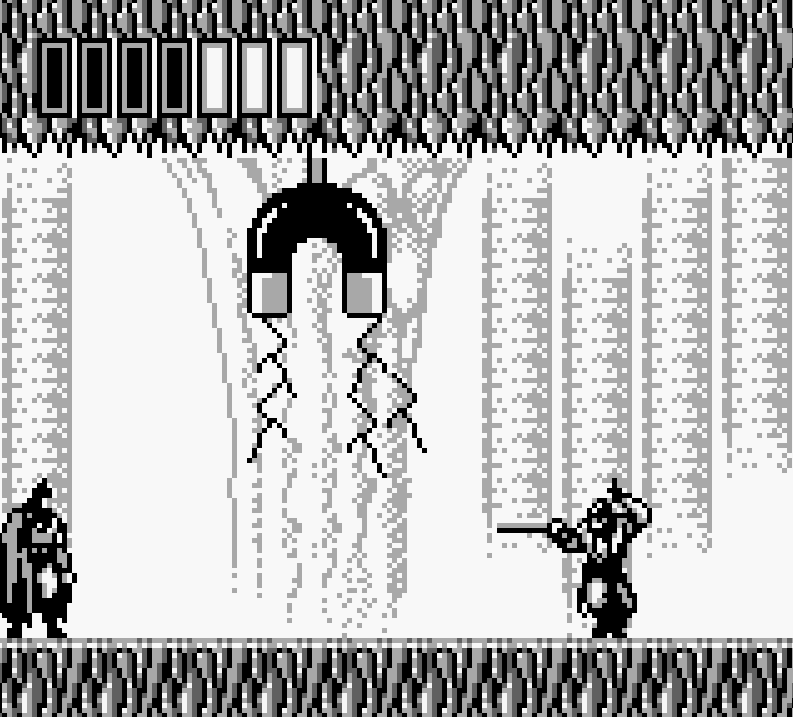 The Game Boy version of the the NES console title that also received wide acclaim, Batman: Return of the Joker is a single-player action game wherein Batman has to prevent villains from overrunning Gotham City in the wake of the title villain’s escape from Arkham Asylum – a familiar storyline for modern gamers to be certain. One aspect of the gameplay that may be jarring for modern gamers is that Batman has to largely rely upon his gadgets to take down enemies rather than martial prowess. This is likely because of the Game Boy’s limited ability to make such action interesting to watch or engage in but once you make it over this initial hump the title truly starts to shine.

One of the most iconic titles to never really make a huge splash over in the West, Mystical Ninja Starring Goemon is one of the best platforming action games around and this game for the Game Boy that came out in 1997 demonstrates just that. Coming out late in the Game Boy’s life, Mystical Ninja Starring Goemon was preceded in the United States by the release of the same game for the Super Nintendo. That title, a bright, colorful take on Sengoku-era Japan is one of the more obscure classics for that system and the same fate befell its portable incarnation for the original Game Boy. Absolutely dripping with Japanese culture from start to finish, Mystical Ninja Starring Goemon is the perfect game for people who love Japanese culture and awesome platforming action.