Survival horror is one of those genres that is so broad as to almost be meaningless as a descriptor. You’ve got zombie survival horror, ghosts, rogue AI, aliens – you name it, if it can kill you, it can be front and center in a survival horror.

Given how diverse the field is, it is pretty tough to find just 10 games to label the best. How do you do that? For our list, we decided to include old and new, sci-fi and horror, as well as psychological versus B-movie horror. We think this list represents a pretty good swath of the titles out there in the genre and we guarantee that they will both provide scares and a good time.

With that said, here are our top 10 survival horror games of all time:

What better location for a survival horror game than an insane asylum? That’s the place you find yourself trapped in during the events of Outlast, easily one of the most terrifying and intense games you will ever play. There’s a story and there’s a conspiracy, but you have to survive the world’s most psychotic version of hide and seek.

Eventually, that’s all that really matters. You’re a nosey reporter who has stumbled upon something really bad. Basically the inmates are running wild and killing everyone in the area.

You can leave, but you try to and, in classic horror film fashion, you can’t. That’s when it sets in that you will be playing out a horror film and we all know what that means: Prepare to run and fall while being pursued by who knows what. Intense is the one word to sum up this game and, after that, memorable.

Do you like your survival horror in outer space but you want something like the zombies in Resident Evil and not the nigh invincible xenomorphs of the Alien franchise? Then you need Dead Space, one of the most beloved survival horror franchises out there that comes from none other than EA (surprisingly).

Combining elements of techno horror with the intense atmosphere of the RE games, Dead Space is nothing terribly unique but it is extremely well executed. It’s also a heck of a lot of fun to play. Your protagonist is neither overpowered nor flailing about helplessly. You’re more powerful than the STARS of Resident Evil, but you’re not the Terminator. It’s a great middle ground that makes Dead Space believable and fun. There’s also a well-crafted lore and narrative that keeps you pushing forward which always helps.

The Alien franchise has always featured science fiction horror at the heart of its stories, but nowhere does this become more true than in the video game Alien: Isolation. Set in Ridley Scott’s dark, Geiger-designed world from the 1980s films, Alien: Isolation not only does a good job of capturing the spirit of the cinematic franchise but also remains faithful to its central conceits and aesthetic. If you expect to come powering through, guns a-blazin’, then prepare to be killed in a brutal if not efficient fashion.

A game that features the survival horror concept more than most on this list, you’re not going to survive for one second if you try to fight the xenomorphs on board. But just putting some aliens in spaceship and telling you good luck isn’t enough for a game.

There’s a continuation of the film’s mythos here as you play as Amanda Ripley, Ellen’s daughter. You have to solve the mystery of what happened to your mother during the first film while also surviving your own xenomorph encounter. It’s a masterpiece that is part cinematic game with some mild action and exploration elements.

Surviving the horrors of an underwater research facility gone bad that wears its inspiration from System Shock proudly on its sleeve. There’s a lot of techno babble nonsense going on here that is probably interesting if you’re into that but, for the most part, you’ve got to survive a malevolent AI while deep underwater. While the premise is common in this genre, it is artfully done in this case and treads the ground between a cinematic experience and an action game.

You’re a painter trying to finish up his life’s work and, while doing so, discover horrific things about your past as you make your way through an equally creepy Victorian mansion. Extremely experimental, Layers of Fear is what you get if you transformed the meditative format of a novel into a video game.

Have you ever wanted to play an interactive horror movie? More specifically, a teen horror slasher flick from the 1980s? That’s the conceit behind Until Dawn and it is absolutely terrifying. Probably one of the coolest games on this list that is a simple concept, Until Dawn puts you in the director’s chair and lets you make all of the stupid choices you normally just see on the screen. If you’ve ever shouted at the screen for a character to do something else, now’s your chance to actually save that character from the impending doom chasing him down.

More by us:  10 of the best horror game enemies from retro titles

A gothic horror that centers on a resident of London who wants to rid himself of his shade but gets pulled into a world of ethereal terror that lurks between the known and the unknown. Very story driven and atmospheric, Amnesia is about one man’s spiraling quest into a madness he neither understands nor can withstand but must defeat.

How do you breathe more life into a franchise that is already considered a standard bearer for the genre? If you’re Capcom, you return it the game to its roots – but with a twist. That’s Resident Evil 7 in a nutshell. It has enough of the familiar to clue you in that it is a RE title but it is different enough that you don’t question what is going on and, trust us, there is a lot going on here. Whereas the earlier games might have taken influence from the zombie films of George Romero, this game has a decided Texas Chainsaw Massacre feel to it.

There’s the pseudo Southern noir and the backwoods house in a swamp but there’s also Umbrella and Chris Redfield. It’s a different setting and the first game in the mainline series to use the first person perspective instead of the over-the-shoulder viewpoint that first premiered in RE 4. Undeniably creepy with a good dose of jump scares, gross out situations, and even body horror, Resident Evil 7 is Capcom’s declaration that the OG survival horror series still has what it takes to chill your blood. 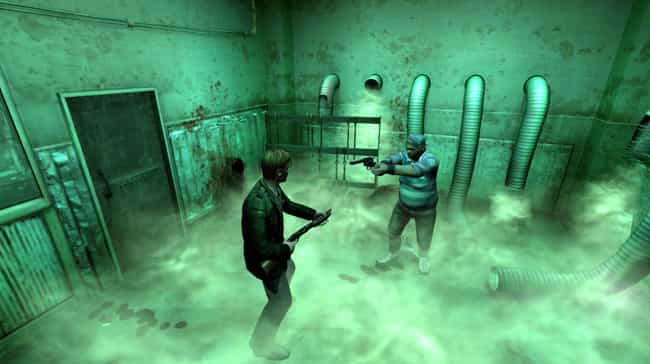 It is hard to make it through this game – especially once everything starts coming together. Infused with an atmosphere that is anything but comforting, Silent Hill opens up in an eery fashion and continues that theme until the very end.

Deeply psychological but also extremely visceral in its depiction of horror, Silent Hill 2 is one of the weirdest, most beautiful horror games you’ll ever play. It is also one of those rare sequels that takes everything gamers loved about the first game and improves upon it without adding a bunch of extraneous nonsense.

More by us:  How PlayStation's Graphics Have Changed Over 25 Years

The fog is here, but it is more for atmosphere than it is to hide graphical deficiencies. But what is the same is an absolutely oppressive atmosphere that is underpinned by a story you’re not sure you want to know more about. Every corner contains more danger, mystery, and riddles than the path behind you. It’s a game that challenges you in multiple ways and it is a study in the melding of gameplay and narrative presentation.

Again, it’s rare that a sequel is better than the original, and even rarer that a remake tops the original anything. But Resident Evil 2 Remake happens to accomplish both things which is a feat that truly sets it apart in the field of media in general. How is Resident Evil 2 Remake superior to the original RE 2? In many ways, it fleshes out the world of RE 2 and the narrative behind that game. Yet, outside of that, it also gives you a ton of content that is virtually unheard of in the modern video game industry.

There is so much to do and explore in the remake that it is the definition of going “above and beyond.” None of this was lost on gamers, either, as the title has received nearly universal praise in the press. For good reason, too, because it not only takes the original as a template but modernizes it and improves upon it in very real ways. Plus, the game is just scary as hell. Best of all, though, is that this is classic Resident Evil.

No gimmicks here, no action figure antics, just pure survival horror. The zombies are scary, Mr. X is maddening, and the general sum of all these parts is outstanding. It wouldn’t be shocking if RE 2 Remake racked up game of the year awards for 2019, but that remains to be seen. What it does have going for it most immediately is that it is a return of the RE we all know and love, just better than ever.

10 of the best leading ladies from...