The arcades never experienced tougher times than the waning days of the early 1990s. Home consoles and PCs were narrowing the technology gap between the two segments and game developers started to focus much of their attention on this burgeoning home market that was all but written off for dead in 1983. That was until the Nintendo Entertainment System’s release.

The success of the NES was, in many ways, the beginning of the end for the vaunted arcades once so ubiquitous but now increasingly uncommon. In those latter days, however, there were two last gasps of success that gave arcades a swan song worthy of their stature and birthed a video game genre that endures in popularity to this day.

Of course, we’re talking about the release of the fighting games Street Fighter II and, later, its chief rival for the crown, Mortal Kombat. These two games, phenomenons in their own right, extended the life of arcades throughout the 1990s and established the ground rules that govern much of the fighting game genre to this day.

The artwork remains iconic and is perhaps some of the best fighting game art ever made. Assembling a cast of characters that was not only a motley but a representative sample of countries from all over the world, the Street Fighter II development team embraced the over-the-top and executed along those lines with masterful skill.

The game was such a success that it spawned numerous iterations on the Street Fighter II formula: Hyper, Super, Turbo, and Championship edition are just a few of them. In fact, it was a huge deal when Capcom finally decided to move on to Street Fighter III, such was the power of SFII. By the time its rivals had moved well past their third or even fourth games, Street Fighter remained Street Fighter II. It’s not hard to see why gamers refused to let go of this game – it is just that spectacular. 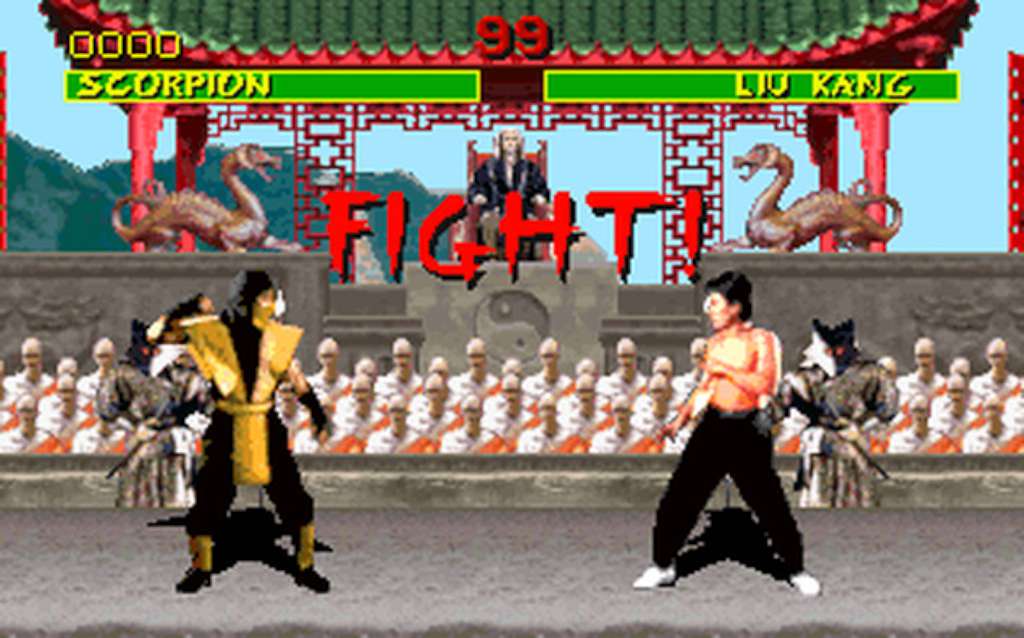 Equally amazing and no less foundational is Midway’s Mortal Kombat, a game that was initially written off as a SFII-clone with video-captured avatars for characters. That assessment is understandable but also deeply flawed – Mortal Kombat uses the space SFII created, but it is its own masterwork in every way.

The main draw for Mortal Kombat, initially, was its use of special moves that could only be executed at the end of a match – and execute they did as typically these button combinations resulted in the graphic death of your opponent.

In the era of the “xtreme,” Mortal Kombat’s fatalities were just what the market wanted, and the lines in front of Mortal Kombat machines rivaled and at times outpaced those at Street Fighter II cabinets. But Mortal Kombat wasn’t all gimmick – it also featured an engaging fighting system that also used combos and special moves. Also to the delight of fans, Mortal Kombat sported a distinctly Kung Fu-action film aesthetic and plotline that made it way more accessible than the sometimes vague and roughly-outlined plot of Street Fighter II.

Another feat that Mortal Kombat pulled off that distinguishes it from the sea of fighting games released during this time is that, like Street Fighter II, its cast of characters is iconic. It’s hard to imagine Mortal Kombat without Scorpion or Sub-Zero, and who can forget Kano or Shang Tsung?

That’s why Mortal Kombat II is the more fair comparison. It featured multiple fatalities, an expanded cast of characters, improved graphics, a more fleshed out storyline, animalities, babalities, secret characters, and more – it was truly a smorgasbord of awesome stuff. Mortal Kombat also had the benefit of coming up in Midway’s NBA Jam era. If Midway knew how to do anything in the 1990s it was how to make an arcade game that clicked with consumers. NBA Jam’s “photo-realistic” graphics helped draw in gamers that may not have looked at Mortal Kombat before which is why Mortal Kombat II became such a mainstream success. While computer generated graphics eventually became the norm for fighting games, this video capture technique was so popular that even the vaunted Street Fighter II has an edition done in this style: The maligned (or cult-classic?) Street Fighter II: The Movie.

Labeling one game better than the other is like definitively saying Coke is better than Pepsi or vice versa. This is based on idiosyncratic tastes and both games are foundational touchstones for the genre. There is no better game, there is only a more fun experience for the individual user. And really what that boils down to, at least with regard to later games, is what fighting game system most appeals to you as a gamer. The two games have done a masterful job at distinguishing themselves in this regard but the difference is quite fundamental even from the initial comparison. One thing is clear: Street Fighter II and Mortal Kombat fundamentally shaped the way fighting games are approached even today.

10 of the best leading ladies from...

New Marvel vs Capcom Cabinet Could Be...