Have you ever wondered what it would be like to be one of the gigantic kaiju monsters like Godzilla or Mothra?

The makers of classic arcade coin-op game Rampage had that same inspiration cross their minds and this addictive, iconic, and classic arcade game does a great job of turning those classic movies into a video game.

Developed and published by arcade titan Bally Midway and released to smoke-filled arcades in 1986, Rampage is underpinned with a simple conceit and tied together by a generation’s love and knowledge of Japan’s great creature-feature flicks. But for those of us that do not have the cultural moorings that the first and second generation gamers did is Rampage still a good game? 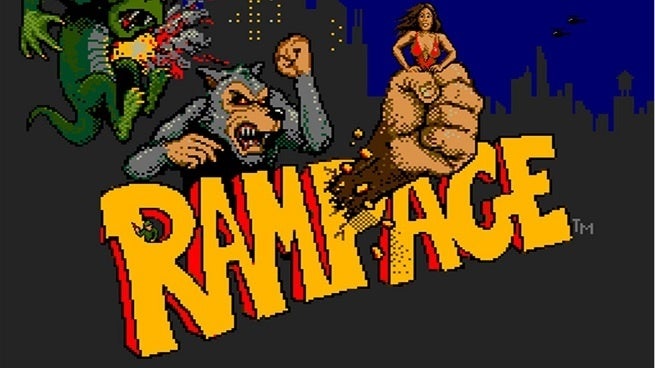 The answer is undoubtedly yes though there are more modern examples that were released in subsequent years. Naturally, you may be wondering just what exactly the objective is in a game ostensibly all about destroying city buildings and that’s pretty much the bedrock foundation of Rampage’s core gameplay.

Scoring and points are awarded based upon the amount of destruction a player unleashes on the world and often the choice of kaiju monster is more a matter of style preference than it is one avatar having clear advantages over another.

Of course there are attempts to stop you along the way, namely the human military units that show up to stop your from leveling their city, but the main focus here is on destroying the city before you and not much else. You do receive damage from enemy attacks but this can be replenished by destroying more of the surrounding environment to reveal health power ups or even eating the soldiers that are attacking you.

How are those for options?

In what was an amazingly violent game for its day, the cartoon depiction of your creature eating people and killing soldiers is tempered by the lack of detail and the otherwise non-salacious way this kind of action is portrayed.

Along those lines there are also various diagetic hazards like appliances in an apartment that have to be handled in a certain way or even people with certain professions that could destabilize your rampage, such as a photographer taking pictures. With three monsters to choose from and up to three simultaneous players each one is limited to certain types of people that they can pick up.

The arcade game, like many of its time, has the same core five stages that repeat over time with increasing difficulty as the player makes their way through the game. Later adapted to every possible console and format out there, Rampage is not alone in the kaiju monster destruction rally game set but it is the founding father and one of the best examples at that.

Our Retro Game Gift Guide For 2019