One of the most easily accessible co-op and competitive video gaming genres is sports games which combine the best aspects of a single-player experience with another person. Racking up points collectively or combatively, it really doesn’t matter, as the focus is always winning. The emotions and trash talk that come into play? Those are just bonuses.

FIFA is one of the most intensely competitive games out there, with players often getting really emotional after a lost match. Who hasn’t tossed a controller or two out of frustration? But for those of us that might need something a little different, or for those FIFA players burnt out on the stress-inducing, hyper-competitive experience of playing against friends, there are games like NHL Slapshot, a fresh approach to a hockey game that combines a peripheral in a non-gimmicky way with solid gameplay. 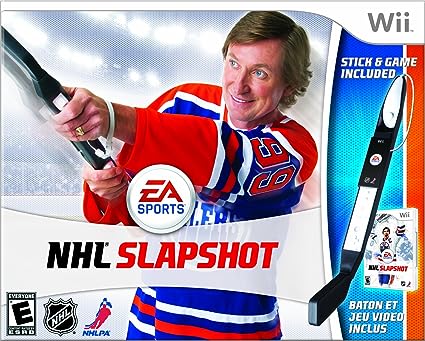 NHL Slapshot for the Nintendo Wii takes advantages of all of the Wii’s motion controls and advanced gaming options. With a hockey stick peripheral, you can literally hit the puck yourself and imitate all the motions of being a hockey player. Not only that, but you can do this while selecting from your favorite NHL teams and playing as your favorite NHL players. You and a friend can go head to head or you can play separately, though we think the competitive play is what will have gamers coming back for more.

The hockey stick is not only well-integrated into the game but also loads of fun to use. Most Wii motion control peripherals were gimmicky and cheap, rarely adding anything to the overall experience. This is not the case with NHL Slapshot. The peripheral not only adds to the game but enhances it in many ways.

But for those of us that don’t like competition or other people there are plenty of in-game modes to choose from, including career mode or season matches.

You can even play as a pee-wee league hockey player with almost no rules on the board except for score more than the other team. Not only that, but you can also guide a pee-wee player from the small times to the big leagues in a career mode that is surprisingly robust for a Wii sports game. Of course, none of this would work if the gameplay wasn’t on point and everything humming along as it should.

The game is well made, and this much is evident from the minute you boot it up. Being conducive to single or multiplayer, NHL Slapshot encourages players to master the game on their own time and then really tear up the ice with other people. There isn’t much absurdity to this game nor are there any outlandish moments – most of it is pure hockey magic. And for most gamers, that is all they ever wanted and all they will ever need. Just be careful when swinging that hockey stick peripheral around. You don’t want to become the next case of a busted television screen due to your Wii’s motion controls.