The 1980s were a golden age for horror films in the United States and worldwide. Classics such as the Nightmare on Elm Street series and Friday the 13th got their start in this decade, alongside the likes of Pac Man and Donkey Kong. So, you might have asked yourself, did film’s horror fad ever fade over into the nascent video games industry? On multiple occasions, but today we are going to talk about one game in particular – Ghosts ‘N Goblins. Like Castlevania from Konami, Ghosts ‘N Goblins from Capcom was a smorgasbord of classic horror. Its stages were filled to the brim with mummies, skeletons, werewolves, and more. 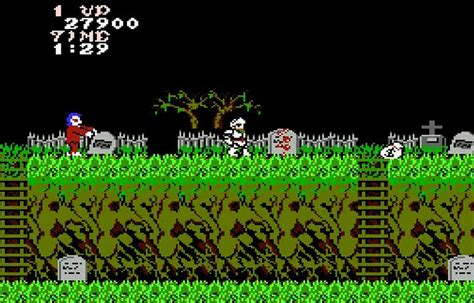 Boasting some of the most difficult gameplay around on each and every system for which it was released, Ghosts ‘N Goblins holds a fond place in the hearts of many gamers not only for its difficult and horror aesthetic but also for its innovation and charm. Released during a time when large, detailed sprites were relatively unheard of in arcade games, Ghosts ‘N Goblins was, in many ways, a harbinger of the more modern video games that would become the hallmark of the Nintendo Entertainment System, released in North America the same year as Ghosts ‘N Goblins’ Japan release and the system that is credited with single handedly saving the games console market in that region.

Rising concomitant with that system here in the United States, Ghosts ‘N Goblins is the definition of the slang phrase “NES hard” or “8-bit difficult.” You get a range of lives and are killed by two hits – first to remove your armour, then the killing blow. The player character takes damage by running into objects or you can die instantly falling into a pit. This is all pretty standard stuff. Where Ghosts ‘N Goblins becomes challenging and even maddening is when the action ramps up as you scroll along. Ostensibly a game in the vein of Super Mario Bros. in that it features platforming action in a side-scrolling guise, Ghosts ‘N Goblins also adds elements from a scrolling shooter such as R-Type.

If you have played those types of games you know a lot of the difficulty can come from the number of objects on screen at once and this is a trick Ghosts ‘N Goblins uses often and to good effect. Also similar to shoot ‘em ups are the various upgrades Arthur can obtain along the way, all of which imbue him with abilities that are similar in function to the upgrades gained by a ship in a shoot ‘em up game. Some have advantages over others during certain stages, but you’ll pretty much have to learn the game through and through to master it.

And master it you shall because – spoiler alert! – once you defeat the nearly impossible boss the first time you will be told that this first run through was only a practice trial, you need to do it all again, this time at a greater difficulty setting. That’s right – Ghosts ‘N Goblins lets you think you’ve beaten the game only to tell you that you have not actually done so but, in fact, need to play it through again.