If we can thank 1980s American cinema for one thing it would be the popularization of the slasher horror flick. Films like Halloween, Nightmare on Elm Street, and Friday the 13th often pitted promiscuous though resourceful teenagers against murderous bad guys that either couldn’t be stopped (Michael Myers or Jason) or couldn’t be killed (Freddy Krueger).

Friday the 13th and Nightmare on Elm Street particularly had mythos that were well suited for a video game adaptation. Jason, as the child of a witch, is resurrected by his mother after being left to drown (accidentally) by camp counselors at Crystal Lake. And (small spoiler warning) the first movie centers around her revenge against the camp at Crystal Lake with the mad, unstoppable titan Jason showing up in the sequels to avenge his mother.

Resurrected by her witchcraft, Jason is extremely powerful and nigh unstoppable. The premise of the video game melds the plot of the first film with that the subsequent films in that you can encounter and defeat both Jason’s mother and Jason himself.

Developed and published by the legendary as well as infamous LJN, the company behind almost every licensed product in the early console era, Friday the 13th for the NES lets you guide counselors around Camp Crystal Lake collecting weapons and items to defeat Jason and his mother. 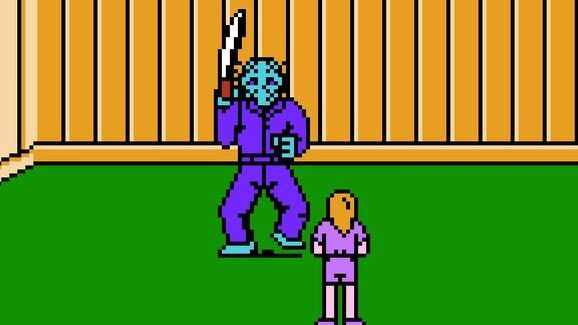 The first appearance of the purple Jason costume outside of a poster for the movie in Japan, the NES iteration of Friday the 13th is a classic in its own way though it cannot be praised for mechanics and game design. Like many titles of the NES era, it is amazingly hard and filled with esoteric mechanics and puzzles to solve. Back in the day, the best way to handle most games was to work with others to figure things out. Most things were solved by word of mouth and many players would simply wear a game out rather than call it quits. Since way fewer titles were released back in the day, this isn’t surprising but it does explain why companies like LJN could survive pumping out relatively schlocky titles.

More by us:  10 Awesome Songs From the Splatoon Series

The challenge with a game like Friday the 13th is that it has most everything bad about older game design going on all at once. There is a method to the madness but figuring it out is more than half the battle. In addition, Jason is an ever-present threat and will absolutely wipe you out time and time again. It would be nice to say this game rewards mastery, but, if anything, it rewards a kind of speed-run mentality that pushes a player to go as fast as they can to collect what they need to finish Jason off. There’s nothing wrong with this approach per se, but if you don’t know what you’re doing and the game insists on being intense from minute one then you’re most likely going to have a bad time.

That said, Friday the 13th for the NES is a quirky game and that makes it interesting. We recommend gamers who are fans of the horror genre play it because there are so many prototypical elements in the game that we see everywhere today (early jump scares, impossible to defeat yet unrelenting enemies, etc.). A stretch to call it a classic, it is not much of a leap to argue that it is a game worth playing – even today.