1982’s Dig Dug from Namco is an arcade classic fondly recalled by many denizens of the early arcades and probably known to modern gamers for their appearances in classic compilations as well as the cameo-filled film Wreck It Ralph.

Developed during what some call the golden age of arcades, Dig Dug has what is one its face a simple premise but what in practice is a challenging – and addictive – arcade game. The titular Dig Dug is tasked with eliminating underground monsters using his shovel and a array of items found in the in-game world. Bathed in colorful, pixel-rich graphics, Dig Dug’s style later foreshadows the more graphically intensive adventures of the Super Mario Bros. on the NES. Unlike Pac Man and Ms. Pac Man with their minimalist styles, Namco really pushed the envelope with Dig Dug and created big sprites and detailed stages that easily conveyed what everything was supposed to be. Coming off of the success of Space Invaders challenger Galaga, Namco didn’t skimp on the content when it came to the arcade version of Dig Dug. With 256 levels to master, the arcade title was an absolute beast to content with, especially given its quarter-killing difficulty in later levels. Home console versions would basically turn Dig Dug into an endless title but the arcade edition itself is somewhat endless. Like many games of this time the devs expect gamers to focus on concept master and getting a high score. Expecting a lot of exposition or storyline in this environment is unrealistic and, for its part, Dig Dug is quite minimal in this area.

Where Dig Dug shines as a game is in its use of incredibly simple concepts in complex ways. Movement is strategic and eliminating monsters is more the culmination of your choices than it is through beating them in a confrontation. This makes Dig Dug a much more contemplative title and slow-paced title from many arcade games of the time. Of course, as the level number increases, the intensity ratchets up appropriately and the player that hasn’t totally mastered the game will fall by the wayside. In many ways this is not only the hallmark of a great arcade game but also a home console title, a realm that Dig Dug envisions in its style. 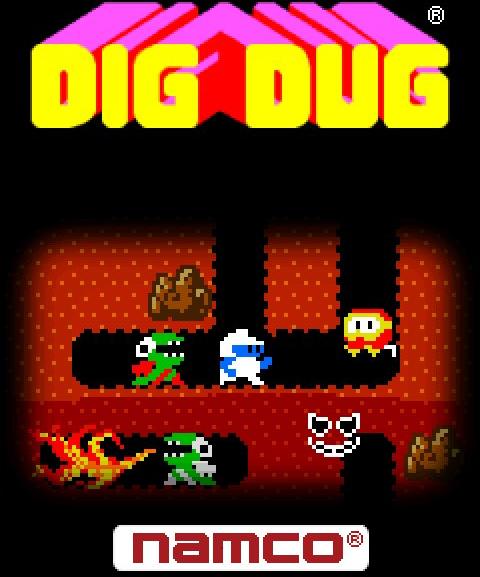 In terms of playing Dig Dug today gamers will find that a lot of its concepts are quite foundational to other titles of the era. Though not a genre bending game like others, Dig Dug is nonetheless a standout in a sea of shooters and Pac Man clones. Depending on who you ask, Dig Dug is right up there with its stablemates in terms of overall popularity in the arcades and is routinely ranked among the best games ever released for the coin ops. It is for this reason that Dig Dug has a place in the arcade hall of fame because it, like other members of such an illustrious club, introduces gameplay concepts that later went on to influences countless titles.