The game you have probably already played but had no idea you have done so, Breakout is an arcade classic from Atari that has as storied a development history as any game.

Coming out in 1976, Breakout is simple in concept though compellingly addictive in execution. Imagine one sided Pong wherein the paddle you control maneuvers at the bottom of the screen in a horizontal motion to deflect a traveling dot back into a wall of multicoloured, layered bricks. As you hit the bricks they disappear with some bricks requiring multiple hits before they vanish. If the player is unable to deflect the ball back up to the wall of bricks, a “life” or turn is lost. As the stage progresses, the ball gains speed and the paddle you use to deflect it becomes smaller and smaller. Clones of this concept have shown up today on everything from the PC to smartphones. If you’ve ever wondered where this idea got its start, you can thank Breakout for this type of gameplay. 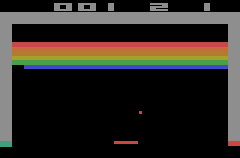 What makes Breakout even more storied in terms of video game history are the players involved in its development and bringing it to market. Of course, industry legend Nolan Bushnell spearheaded the project, but did you know that Apple’s very own Steve Jobs and Steve Wozniak also worked on this classic title? 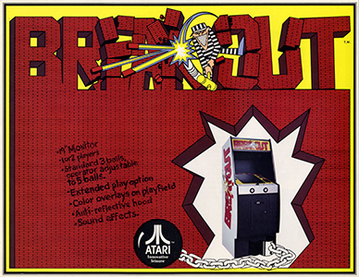 Not only did Steve Jobs and Steve Wozniak work on Breakout together, but they did an amazing job for Atari. As the story goes, Steve Jobs was tasked with designing a board for $750 with an incentive to use as few TTL chips as possible. This was beyond Steve Job’s skill set but fit in perfectly with Wozniak’s who was employed at Hewlett Packard at the time. Steve Wozniak did such a masterful job that Steve Jobs received a $5000 bonus on top of the $750 though he only shared $325 with Wozniak. The design was so complex, using nuanced technique and idiosyncratic methods developed by Wozniak, that Atari ultimately couldn’t use the design though the duos work on it didn’t go unnoticed.

Atari complained that the design, on top of being complex, was too compact given the arcade manufacturer’s methods for bringing tons of cabinets to market. Many also argue that Atari didn’t understand much of what Wozniak did. Regardless, the company released the game using a modified board that used 100 TTL chips. The cabinet into which the game was placed used a black and white monitor with colored cellophane strips at the top to distinguish the bricks from each other.

All in all, the game is a master study in restraint and good gaming based upon solid, basic concepts. Like Pong, Breakout today exists as that primitive, go-to game that shows up on everywhere and in nearly everything. It isn’t difficult to find a ton of Breakout clones on the Google Play or App Store right now. When you look at influences on modern gaming concepts, it is tough to ignore Breakout’s impact in this sector.

Taking to the turquoise skies with MicroProse’s...